Migration Policies and Behavioural Change: How governments are addressing threats linked to migration

Migration Policies in the EU have increasingly relied on behavioural insights and market-based mechanisms to address threats linked to migration. Measures providing incentives to migrants to make particular migratory decisions and disincentives to counter undesirable behaviour have been used widely in the fields of asylum, border control and migrant integration, among others.

The migration-security nexus and the increasing relevance of new technologies and social media are enabling governments to better assess, respond and counter security threats.

Looking closely at migration policies, security policies and technology and social media policies since 2015 in select European and non-European countries, it is noticeable that many policy makers are increasingly relying on approaches aimed at addressing security challenges, changing individual behaviours, and affecting the environment that gives rise to these challenges.

These mechanisms allow policymakers to address some of the factors that give rise to contested narratives or “misperceptions” of Europe, which to some extent motivate decisions to migrate. These approaches are also aimed at preventing and countering border security threats, economic threats, and threats to individual migrants. These approaches are often used in combination, where changes in legislation are coupled with the creation of incentives and command and control mechanisms to induce compliance. 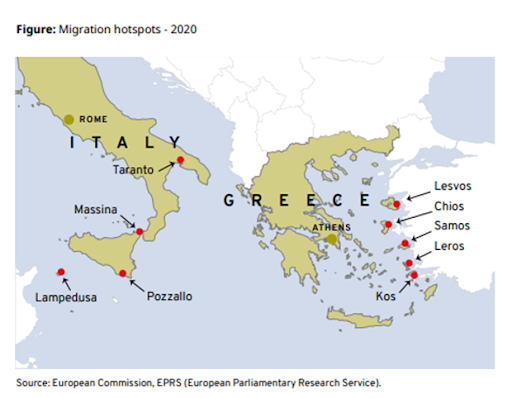 Command and control refers to measures regulating behaviour through coercion. One example of this is the penal code.

Punishments imposed are meant to deter individuals from not complying with the regulations, and punishing those who do through sanctions.

In migration policymaking, changes in legislation have been used in several countries as a response to an increasing threat. In 2015, following the “migration crisis” countries put in place new legislation aimed at addressing the increasing and “disproportionate” number of asylum seekers arriving in Europe. This manifested in the hotspot approach adopted in Greece, introduced by the European Commission to support frontline member states, to alleviate the pressure and provide operational assistance to identify, register, fingerprint, and debrief newly arriving migrants and asylum seekers, as well as efficiently support return operations.

Another pertinent example of command and control is “crimmigration” widely adopted throughout North African countries. This approach criminalises all migrants arriving through irregular channels, including asylum seekers who are detained and often not allowed to lodge asylum claims with the authorities.

One important mechanism intended to change behaviour is the reliance on incentives and disincentives, aimed at encouraging migrants to follow a certain behaviour and discouraging others from behaviours seen as undesirable.

Disincentives include bringing migrants’ awareness to the long waiting times of processing migrant and asylum applications. Such approaches are meant to discourage migrants who do not have a legitimate claim or who hold an “inaccurate perception” of Europe or a particular country as easy to access in terms of the asylum system, while supporting those who would otherwise not have alternative options.

Another similar mechanism based on disincentives is the provision of in-kind support rather than cash to asylum seekers awaiting a decision. This measure comes to counter what was seen as a pull effect of financial support given to migrants and asylum seekers in Germany.

Alternatively, mechanisms based on incentives were also put in place to support migrants in their integration. One such example is the two-tier system developed in Germany in 2016, where migrants were divided into two groups based on their countries of origin. Migrants who were seen as most likely to receive a positive decision in their cases were put on a track to integrate through language courses and access to the labour market while awaiting a decision. A similar example is a measure introduced in Belgium, where integration efforts were directly linked to the outcomes of the renewal of migrants’ residence permits. Such conditionality meant that for migrants to be able to stay in the country, they had to show proof of their integration in the different communities.

This practice is also not uncommon in other regions of the world, including in North Africa. Practices such as criminalising irregular migration, including that of asylum seekers, and associated practices such as push backs, are also meant to change migrants’ perceptions of these countries as unfavourable countries of transit or destination.

Looking at the measures addressing threats linked with migration serves as a foundation to understand to what extent perceptions held by migrants are relevant for such policy measures and the behavioural change expected. PERCEPTIONS will further investigate how policymakers understand the perceptions held by migrants vis-à-vis the EU, the extent to which these perceptions represent a security risk and ways to counter these potential risks, if any.

Note: This article is based on preliminary desk research conducted in the context of Workpackage 2 in the PERCEPTIONS project looking at policies from 2015 onwards, in selected countries.

Migration to the EU: a survey of first-line practitioners’ perceptions during the…

Europe as a place of social opportunity

Europe as a place of economic opportunity

Current migration trends in and within Europe

Migration Policies and Technology: How governments are…

Migration during the COVID-19 pandemic

Migration in and from America: current statistics

Current migration trends from and within Asia

This website uses cookies to improve your experience. We'll assume you're ok with this, but you can opt-out if you wish. Accept Read More

This website uses cookies to improve your experience while you navigate through the website. Out of these, the cookies that are categorized as necessary are stored on your browser as they are essential for the working of basic functionalities of the website. We also use third-party cookies that help us analyze and understand how you use this website. These cookies will be stored in your browser only with your consent. You also have the option to opt-out of these cookies. But opting out of some of these cookies may affect your browsing experience.
Necessary Always Enabled
Necessary cookies are absolutely essential for the website to function properly. This category only includes cookies that ensures basic functionalities and security features of the website. These cookies do not store any personal information.
Non-necessary
Any cookies that may not be particularly necessary for the website to function and is used specifically to collect user personal data via analytics, ads, other embedded contents are termed as non-necessary cookies. It is mandatory to procure user consent prior to running these cookies on your website.
SAVE & ACCEPT